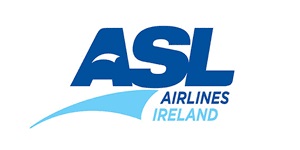 ASL Aviation Group is a holding built from the core of ASL Airlines Ireland itself a rebrand of Air Bridge Carriers which was formed in 1972 with four Argosy freighters to fly fresh produce from the Channel Islands to the UK. This work was quickly supplemented by ad-hoc charter work, with special emphasis on 'awkward loads' such as aircraft engines and heavy machinery for the North Sea oil fields.
Between 1992 and June 1998, the company was named Hunting Cargo Airlines then Air Contractors. On March 2008, Air Contractors acquired French carrier Europe Airpost and the group was renamed ASL Aviation Group representing the three core activities of the group : Airlines, Support and Leasing.
Several other companies were acquired so ASL Aviation Group announced that Air Contractors would be rebranded as ASL Airlines Ireland, Europe Airpost as ASL Airlines France, Farnair Hungary as ASL Airlines Hungary and Farnair Switzerland as ASL Airlines Switzerland (this last one ceased all operations on 1 February 2018).

This page lists all films, TV series, and video games that feature aircraft of