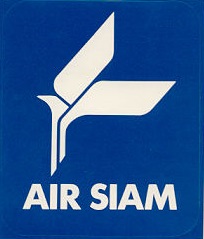 Air Siam (Thai: แอร์สยาม) was an airline based in Thailand which operated from 1965 until 1976. The airline was established as Varan Air-Siam on 15 September 1965 by Prince Varanand, who was the major shareholder at the time. Operations started in 1970 using Douglas DC-4s, initially flying the Bangkok−Hong Kong route as a freighter service. Following an agreement with Overseas National Airways for the wet-lease of a Douglas DC-8-63 and operational assistance from Trans World Airlines, scheduled passenger services started in March 1971 serving Bangkok, Honolulu, Tokyo and Los Angeles. All these services were suspended in January 1972; the Bangkok–Hong Kong sector was reactivated in May the same year with a leased BAC One-Eleven and extended to Tokyo seven months later, in December 1972, operated with a Boeing 707.

In April 1974, the carrier placed an order for two Airbus A300s, one A300B2 and one A300B4, taking an option for one more of the longer-range variant. After taking delivery of the first of these aircraft on a lease basis from Airbus in October 1974, Air Siam became the second operator worldwide in deploying the type on scheduled services, after Air France. Also in 1974, the company placed an order for a Douglas DC-10-30, to be used on the Bangkok–Los Angeles route. Rights for the routes the airline intended to deploy the A300s on were never granted, and the A300B2 was returned to the lessor just a year after it was incorporated into the fleet. Before Air Siam started flying long-haul services, Thailand's flag carrier Thai International was the country's single long-haul operator. Already in 1974, the airline had accused both Thai International and the Thai Civil Aeronautics Board for obstructing their expansion plans. Despite various governments had considered the possibility of a merger, this never materialized. The new government that took office in 1976 had a different vision, and was decided for Thailand to have just one long-haul carrier.

This page contains all films, TV series, and video games that feature aircraft of Air Siam.