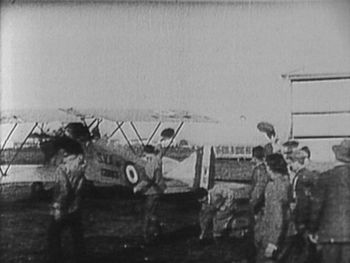 Ansaldo SVA.5 seen in The Story of Aviation .

The Ansaldo SVA (named for Savoia-Verduzio-Ansaldo) was a family of Italian reconnaissance biplane aircraft of World War I and the decade after. Originally conceived as a fighter, the SVA was found inadequate for that role. Nevertheless, its impressive speed, range and operational ceiling, with its top speed making it one of the fastest (if not the fastest) of all Allied combat aircraft in World War I, gave it the right properties to be an excellent reconnaissance aircraft and even light bomber. Production of the aircraft continued well after the war, with the final examples delivered in 1928. Two minor variants were produced, one with reconnaissance cameras, the other without cameras but extra fuel tanks. About 1245 aircraft built.

This page lists all films that feature the Ansaldo SVA.