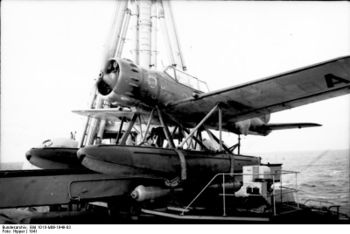 Arado Ar 196 of the Kriegsmarine.

The Ar 196 was a shipboard reconnaissance aircraft built by the German firm Arado starting in 1936. The next year it was selected as the winner of a design contest, and became the standard aircraft of the Kriegsmarine (German Navy) throughout World War II. 541 aircraft built from 1938 to 1944.

This page lists all films that feature the Arado Ar 196.