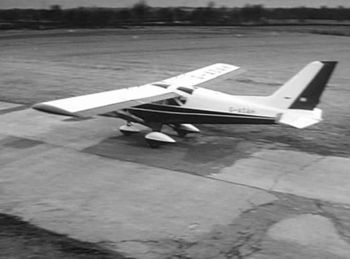 The Beagle A.109 Airedale was a British light civil aircraft developed in the 1960s. It was a four-seat, high-wing braced monoplane with a fixed, tricycle undercarriage, based on the Auster C.4 Atlantic design that flew in prototype form shortly before Beagle bought the Auster company. The performance of the Airedale was decidedly lacklustre, largely due to its comparatively high structural weight, and it was unable to compete in the market with its US competitors.

This page lists all films that feature the Beagle A.109 Airedale.

Pages in category "Beagle A.109 Airedale"