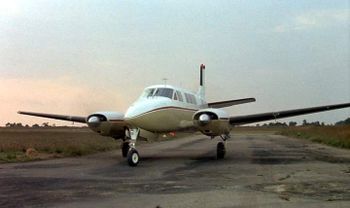 The Beechcraft Queen Air is a twin engined light aircraft produced in several different versions from 1960 to 1978. Based upon the Twin Bonanza, with which it shared key components such as wings, engines, and tail surfaces, but featuring a larger fuselage, it served as the basis for the highly successful King Air series of turboprop aircraft. It is often used as a private aircraft, utility, or small commuter airliner. Production ran for 17 years, with many aircraft still flying.