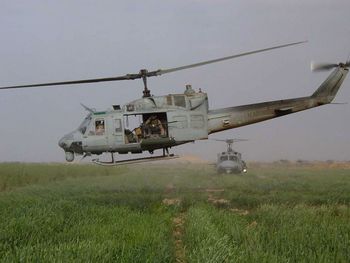 The Bell UH-1N Twin Huey is a twin-engined, twin blade, medium/heavy-lift utility helicopter in extensive use with U.S. and Canadian armed forces, as well as many militaries around the world. It is an improved version of the Bell UH-1 Iroquois, and carries out transport and search and rescue roles. A civilian version, the Bell 212/412, was developed in parallel with the UH-1N. The helicopter is also in production as the UH-1Y Venom, a four bladed variant similar to the Bell 412, used by the USMC.

This page lists all films that feature a variation of the Bell UH-1N Twin Huey. For the civilian version, see Bell 212/412. For the single-engined variant, see Bell UH-1 Iroquois.