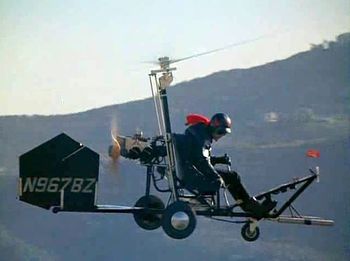 The Bensen B-8 is a small, single-seat autogyro developed in the United States in the 1950s. Although the original manufacturer stopped production in 1987, plans for homebuilders are still available as of 2019. Its design was a refinement of the Bensen B-7, and like that aircraft, the B-8 was initially built as an unpowered rotor-kite. It first flew in this form in 1955, and on 6 December a powered version, designated B-8M (M for motorised) first flew. The design proved to be extremely popular and long-lasting, with thousands of sets of plans sold over the next thirty years.

This page contains all films, TV series, and video games that feature the Bensen B-8.

Pages in category "Bensen B-8"