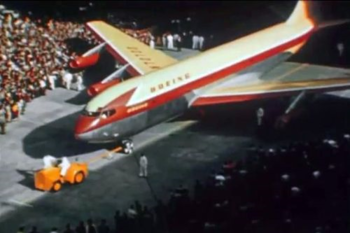 The Boeing 367-80, or "Dash 80" as it was known at Boeing, is an American prototype jet transport built to demonstrate the advantages of jet aircraft for passenger transport. The Dash 80 was the prototype for the KC-135 Stratotanker tanker and the 707 airliner. It was built in less than two years from project launch in 1952 to rollout on May 14, 1954. Its US$16 million cost was an enormous risk for the Boeing Company, which had no committed customers. Only one was built; it is now in the Steven F. Udvar-Hazy Center, an annex of the Smithsonian Institution's National Air and Space Museum at Washington Dulles International Airport in Virginia.

This page contains all films, TV series, and video games that feature the Boeing 367-80.