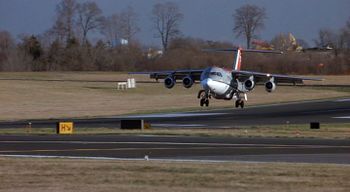 The British Aerospace BAe 146 is a medium-sized regional jet airliner formerly manufactured by British Aerospace, later part of BAE Systems. Production ran from 1983 until 2002. Manufacture of an improved version known as the Avro RJ began in 1992. A freight-carrying version has the designation "QT" (Quiet Trader), while a convertible version is designated "QC". The BAe 146 comes in -100, -200 and -300 models. The equivalent Avro RJ versions are designated RJ70, RJ85, and RJ100. With 387 aircraft produced, the Avro RJ/BAe 146 is the most successful British civil jet programme.

This page lists all films that feature a variation of the British Aerospace BAe 146 Avro RJ.