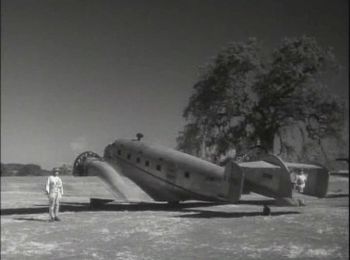 Socrates H. Capelis drew a unorthodox plane in 1930. A less radical design by Dr. John E. Younger featured all-metal construction, and was built in 1933 as an all-metal low-wing, retractable gear twin engine airliner with a triple vertical stabilizer supporting a dual (biplane arrangement) horizontal stabilizer.
On April 15, 1938, the XC-12 suffered minor damages from a forced landing after running out of fuel over Fresno, California. This single aircraft was bought by RKO in March 1939. He then started a movie career in fifteen films until 1950.

This page lists all films that feature the Capelis XC-12.