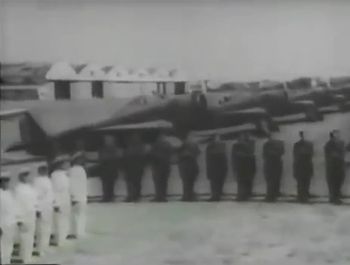 Developed from the Ca.301, a single-seat fighter version of a similar design that was not put into production, the Caproni AP.1 was a two-seater version, fitted with a more powerful Alfa Romeo radial engine. Designed to serve both as a fighter and an attack aircraft, it was a low-wing monoplane with a fixed landing gear of mixed construction, having trouser-covered legs. Although it was a monoplane at a time when many of the air forces of the world were flying biplanes, the Caproni was still an anachronism with fixed landing gear (at that time, most aircraft also had fixed landing gear). The AP.1 prototype first flew on 27 April 1934. An initial series of 12 aircraft was delivered within 1936. In the same year, the Regia Aeronautica ordered a second series with improvements including a more powerful Alfa Romeo engine and more aerodynamic landing gear. In service, the large landing gear trousers were often removed for ease of maintenance.

This page lists all films that feature the Caproni A.P.1.