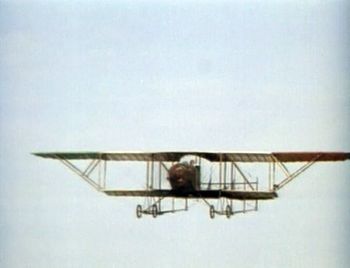 The Caudron G.3 was a single-engined French biplane built by Caudron, widely used in World War I as a reconnaissance aircraft and trainer. In comparison to its competitors, it had a better rate of climb and it was considered especially suitable in mountainous terrain. Following the outbreak of the First World War, it was ordered in large quantities. The Caudron factories built 1423 aircraft (2450 total were built in France) and it was built under licence in several other countries (233 were built in England and 166 were built in Italy). The Caudron brothers did not charge a licencing fee for the design, as an act of patriotism. Usually, the G.3 was not equipped with any weapons, although sometimes light, small calibre machine guns and some hand-released small bombs were fitted to it. It was followed in production by the Caudron G.4, which was a twin-engined development.

This page lists all films that feature the Caudron G.3.