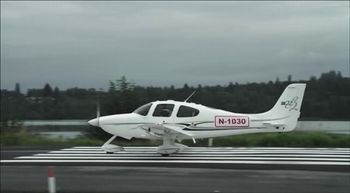 The Cirrus SR22 is a single-engine, originally four and later five-seat, composite aircraft built by Cirrus Aircraft starting in 2001. It is a more powerful version of the Cirrus SR20, with a larger wing, higher fuel capacity, and a 310-horsepower (231 kW) engine. It is extremely popular among purchasers of new aircraft and has been the world's best-selling, single-engine, four-seat aircraft every year since 2004. Like the Cessna 400—but unlike most other aircraft in its class—the SR22 has fixed (non-retractable) landing gear. The aircraft is perhaps best known for being equipped with the Cirrus Airframe Parachute System (CAPS), an emergency whole-plane parachute capable of lowering the entire aircraft (and occupants) safely to the ground after a loss of control, structural failure, or mid-air collision.

This page contains all films, TV series, and video games that feature the Cirrus SR22.