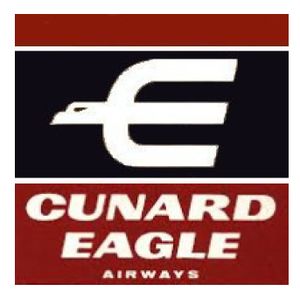 Cunard Eagle Airways was the re-branding name of the British company Eagle Airways Ltd when the Cunard Steamship Company bought a 60% shareholding of it in March 1960. The airline took delivery of its first Bristol Britannia aircraft, replacing Douglas DC-6, on April 1960, and its first jet aircraft, Boeing 707 on February 1962, for its Transatlantic routes. The company also operated Vickers Viscount on Antillean routes with the USA. On August 1963, the airline's official name changed to British Eagle International Airlines. A new livery displaying the British Eagle name in full on the company's aircraft was adopted.