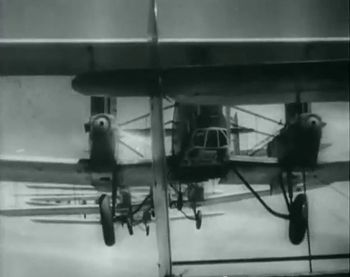 Curtiss B-2 Condor seen in The Conquest of the Air.

The Curtiss B-2 Condor was a medium bomber, large fabric-covered biplane aircraft. Its two engines sat in nacelles between the wings, flanking the fuselage and host a gunner station on their trailing edge. It had a twin set of rudders on a twin tail. Built in 1929, it was put out of service in 1934.

A total of 13 Curtiss B-2 Condor were built.

This page lists all films that feature a variation of the Curtiss B-2 Condor.

Pages in category "Curtiss B-2 Condor"