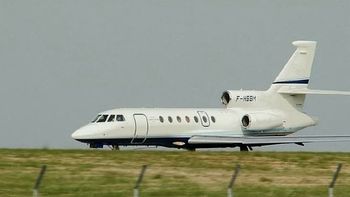 The Dassault Falcon 50 is a French-built super mid-sized, long-range corporate jet, featuring a three jet engine layout with an S-duct central engine. It has the same fuselage cross section and similar capacity as the earlier Falcon 20 twinjet but is a completely new design that is Area ruled and includes a more advanced wing design. Dassault developed a maritime surveillance and environmental protection version as the Gardian 50. The Falcon 50 was later replaced by the Falcon 50EX, the first of which flew in 1996, and the last of which was delivered in 2008. The Falcon 50EX features improved engines and other enhancements to give further range improvements to an already long-legged jet. It remains a very popular corporate jet for its long-range, luxury, and for the recognition of status for owning a fast three-engined jet.

This page lists all films that feature the Dassault Falcon 50.