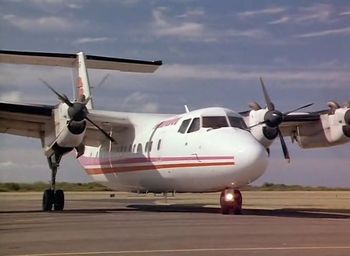 The de Havilland Canada DHC-7, popularly known as the Dash 7, is a turboprop-powered regional airliner with STOL capabilities. It first flew in 1975 and remained in production until 1988 when the parent company, de Havilland Canada, was purchased by Boeing and was later sold to Bombardier. A few military operators used it with specific conversions as CC-132 or O-5A, EO-5B/C.

This page lists all films that feature a variation of the de Havilland DHC-7 ‘Dash 7’.