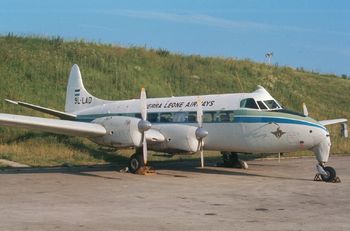 The de Havilland DH.114 Heron was a small propeller-driven British airliner that first flew on 10 May 1950. It was a four engine development of the de Havilland Dove, with a stretched fuselage. It was designed as a rugged, conventional low-wing monoplane with tricycle undercarriage that could be used on regional and commuter routes. 150 were built, exported to around 30 countries. Herons later formed the basis for various conversions, such as the Riley Turbo Skyliner and the Saunders ST-27 and ST-28.

This page lists all films that feature a variation of de Havilland DH114 Heron.