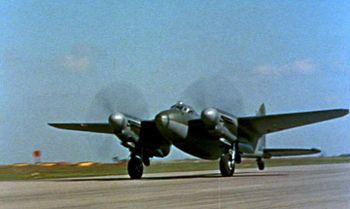 The de Havilland DH98 Mosquito was a British multi-role combat aircraft that served during the Second World War and the Post-war era. It saw service with the Royal Air Force (RAF) and many other air forces.Originally conceived as fast bomber, the Mosquito was adapted to many other roles during the air war, including: low to medium altitude daytime tactical bomber, high altitude night bomber, pathfinder, day or night fighter, fighter-bomber, intruder, maritime strike, and fast photo reconnaissance aircraft carrying out aerial reconnaissance. It was also used by the British Overseas Airways Corporation (BOAC) as a transport. More than 7000 aircraft have been built.

This page lists all films that feature a variation of the de Havilland DH98 Mosquito.