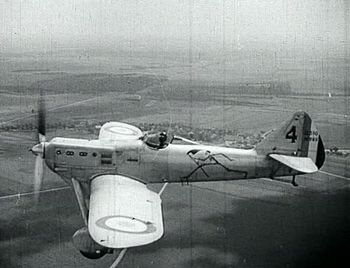 The Dewoitine D.500 was an all-metal, open-cockpit, fixed-undercarriage monoplane fighter aircraft, used by the French Air Force in the 1930s. Introduced in 1936, the design was soon replaced by a new generation of fighter aircraft with enclosed cockpits and retractable undercarriage, including the 510's successor, the Dewoitine D.520. The D.500, designed by Émile Dewoitine, was based on C1 specifications issued in 1930 by the French Air Ministry, and was to be a replacement for the Nieuport 62. The prototype first flew on 18 June 1932. In November 1933, sixty aircraft were ordered, with the first production D.500 flying on 29 November 1934. Aircraft armed with a 20 mm cannon firing through the propeller hub - instead of two nose-mounted machine guns - received the designation D.501.

This page lists all films that feature the Dewoitine D.500.