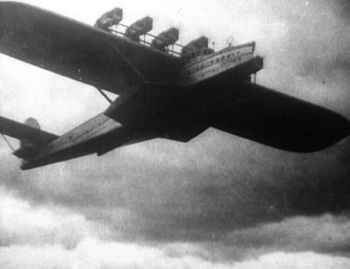 The Dornier Do X was the largest, heaviest, and most powerful flying boat in the world when it was produced by the Dornier company of Germany in 1929. First conceived by Dr. Claudius Dornier in 1924, planning started in late 1925 and after over 240,000 work hours it was completed in June 1929. The Do X was financed by the German Transport Ministry and built in a specially designed plant at Altenrhein, on the Swiss portion of Lake Constance, in order to circumvent the Treaty of Versailles which forbade any aircraft exceeding set speed and range limits to be built in Germany after World War I. While the type was popular with the public, a lack of commercial interest and a number of non-fatal accidents prevented more than three examples from being built.

This page lists all films that feature a variation of the Dornier Do X .

Pages in category "Dornier Do X"