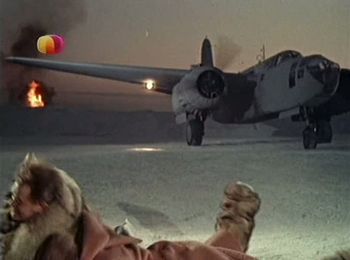 In the autumn of 1937, Douglas puts its Model 7B in a competition for an attack aircraft. It first attracts any US orders but a french Purchasing Commission displays some interest which led in 1939 to order 100 production aircraft under the name DB-7 (later, a further 170 more planes were ordered). Then the Belgium and latter the U.K. ordered it too, given the aircraft the name of Boston among British and Commonwealth air forces, while the Royal Air Force night fighter variants (which led to the P-70) were given the service name Havoc. The United States Army Air Forces eventually ordered the DB-7 under the designation "A-20" and gave it the popular name "Havoc". Its true impact was that the Douglas bomber/night fighter was extremely adaptable and found a role in every combat theater of the war and excelled as a true "pilot's aeroplane."

Used by several air forces, principally those of the Soviet Union, United Kingdom, and United States, the DB-7 was also on strength for Australia, South Africa, France, and the Netherlands during the war, and Brazil afterwards.

Pages in category "Douglas A-20 Havoc"