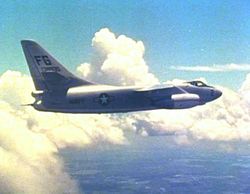 The Douglas A-3 Skywarrior was originally designed as a strategic bomber for the United States Navy and was among the longest serving carrier-based jet aircraft in history. It entered service in the mid-1950s and was retired in 1991. A modified derivative also served in the U.S. Air Force as a tactical until the early 1970s as the B-66 Destroyer, to include EB-66 electronic warfare and RB-66 reconnaissance versions.

This page lists all films that feature a variation of the Douglas A-3 Skywarrior.

Pages in category "Douglas A-3 Skywarrior"