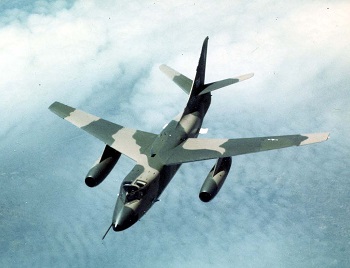 The Douglas B-66 Destroyer was a U.S. Air Force Tactical Air Command light bomber based on the United States Navy's A-3 Skywarrior. It was intended to replace the Douglas A-26 Invader. An RB-66 photo-reconnaissance version was ordered simultaneously. The USAF B-66 retained the three-man crew from the US Navy A-3, but incorporated ejection seats that the US Navy variant lacked. 294 were built.

This page lists all films, TV series, and video games that feature the Douglas B-66 Destroyer.

Pages in category "Douglas B-66 Destroyer"