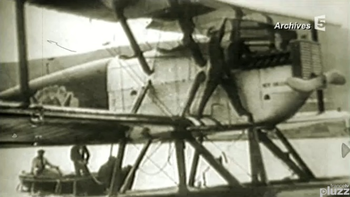 The Douglas World Cruiser was designed in 1923 from the Douglas DT torpedo bomber to meet a requirement asking for a plane able to achieve a flight around the world. It whas a classical landing gear which could be replaced by two floats. The first flight occured in november and after six months of testings and training, four planes took off from westward from the state of Washington. The lead aircraft crashed in Alaska and another one over the Atlantic but the two remaining airframes were joined by the prototype at Nova Scotia (Canada). They eventually landed all three at Sattle after a trip of five months and twenty two days, or 371 flight hours. The planes were quickly phased out but Douglas derivated an Observation aircraft of this proven airframe. Baptised DOS by the manufacturer, the Army named it O-5 and ordered six planes (with less fuel but with two defensive guns in the rear cockpit).

This page lists all films that feature a variation of the Douglas World Cruiser.