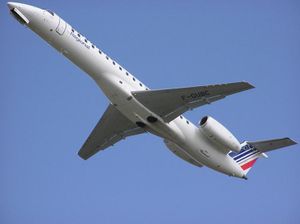 The Embraer ERJ 145 family is a series of regional airliners produced by the Brazilian aircraft company Embraer. All members of the series are powered by two turbofan engines mounted on the rear fuselage giving a range of 2,500 kilometers. The ERJ 145 was finally released in late 1996 following a long gestation period. This was due to aerodynamic concerns with the design (initially intended to be largely similar to the smaller EMB 120 Brasilia). Since this release the ERJ 145 and its derivatives have been a success with 1,100 being built by 2009. There are three members of the family; the ERJ 135 (37 passengers), ERJ 140 (44 passengers) and the ERJ 145 (50 passengers) with a military variant the R-99 and the Legacy business jet also being developed from the design.

This page lists all films that feature a variation of the Embraer ERJ 145.