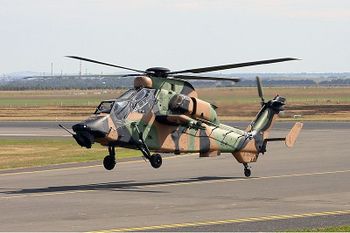 The Eurocopter EC 665 Tiger/Tigre is an attack helicopter manufactured by Eurocopter. In Germany it is known as the Tiger; in France and Spain it is called the Tigre. In 1984, the French and West German governments issued a requirement for an advanced multi-role battlefield helicopter. A joint venture consisting of Aérospatiale and MBB was subsequently chosen as the preferred supplier. The first prototype first flew in April 1991. When Aérospatiale and MBB, among others, merged in 1992 to form the Eurocopter Group, the Tiger program was transferred as well. Serial production of the Tiger began in March 2002 and the first flight of the first production Tiger HAP for the French Army took place in March 2003. The delivery of the first of the eighty helicopters ordered by the French took place in September 2003. At the end of 2003, deliveries began of the 80 UHT version combat support helicopters ordered by Germany to the Federal Office of Defense Technology and Procurement. Australian and Spanish Army have also ordered the Tiger/Tigre.

This page lists all films that feature the Eurocopter Tiger/Tigre.