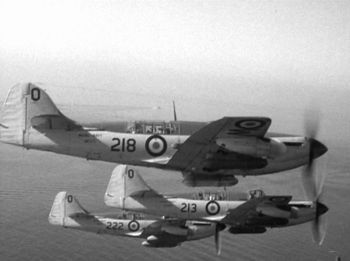 Fairey Firefly AS.Mk.6 seen in From the Sea to the Land Beyond.

The Fairey Firefly was a British Second World War-era carrier-borne fighter aircraft and anti-submarine aircraft of the Fleet Air Arm (FAA). It was superior in performance and firepower to its predecessor, the Fulmar, but only entered operational service towards the end of the war. Designed around the contemporary FAA concept of a two-seat fleet reconnaissance/fighter, the pilot and navigator/weapons officer were housed in separate stations. The design proved to be sturdy, long-ranging and docile in carrier operations, although the limitations of a single engine in a heavy airframe reduced overall performance. The Fairey Firefly served in the Second World War as a fleet fighter but in postwar service, although it was superseded by more modern jet aircraft, the Firefly was adapted to other roles, including strike operations and anti-submarine warfare, remaining a mainstay of the FAA until the mid-1950s. About 1700 aircraft were produced.

This page lists all films that feature the Fairey Firefly.