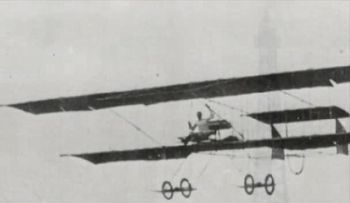 The Farman HF.3, also known as Farman III, was an early French aircraft, designed and built by Henry Farman in 1909. Its design was widely imitated, so much so that aircraft of similar layout were generally referred to as being of the Farman type. Henry Farman's first aircraft had been bought from the Voisin brothers in 1907. Soon after his first flights Farman begun to modify and improve the design of the aircraft which was known as Voisin-Farman I. During 1908 Farman re-covered the aircraft with 'Continental' rubberized fabric and added the side -curtains and it was re-designated the Farman I-bis. During 1908 the Voisin brothers built him another aircraft, to be called the Farman HF.2 or Farman II, incorporating refinements of the design to Farman's specification. However, Voisin sold this aircraft to J.T.C. Moore-Brabazon. Brabazon subsequently exported the aircraft to England, where it became known as the Bird of Passage. This episode naturally angered Farman, and caused him to break his association with Voisin in early 1909 and start aircraft construction for himself, and he designed and built the Farman HF.3.

This page lists all films that feature the Farman HF.3.