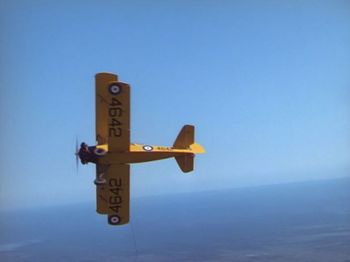 Fleet 16B Finch II seen in Captains of the Clouds.

The Fleet Finch (Fleet Model 16) is a two-seat, tandem training biplane produced by Fleet Aircraft of Fort Erie, Ontario. There were a number of variants mainly based on engine variations. Over several years beginning in 1939, a total of 447 Finches were built, nearly all (431) of them for use as elementary trainers in the British Commonwealth Air Training Plan (BCATP) during the Second World War. More than 600 airplanes built.

This page lists all films that feature the Fleet Finch.