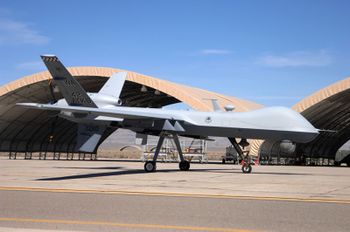 The General Atomics MQ-9 Reaper is an Unmanned Combat Air Vehicle, a successor to the R/MQ-1 Predator, and originally designated the Predator B. Significantly more powerful that it's predecessor, the Reaper can carry a variety of weaponry as well as a variety of reconnaissance systems and has an endurance of up to 14hrs at maximum weight.

This page lists all films that feature a variation of the General Atomics MQ-9 Reaper.

The following 35 pages are in this category, out of 35 total.