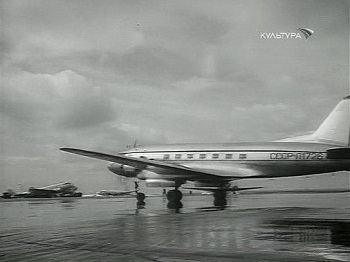 The Ilyushin Il-12 (NATO reporting name "Coach") was a Soviet twin-engine cargo aircraft, developed in the mid-1940s for small and medium-haul airline routes and as a military transport. It was developed as a private venture by the Ilyushin Design Bureau from autumn 1943 and was intended as a replacement for the Lisunov Li-2. The Il-12 was revealed to the public on 1 May 1947, when a group of aircraft participated in the annual May Day flyby over Red Square in Moscow. Performance testing was completed by 20 May, and the first regular passenger service by the Il-12 with Aeroflot began in June 1947. From 1956, the Il-12 (modified for use on ice runways) supported the Soviet expeditions to Antarctica. Aeroflot continued to use the Il-12 on some routes until the end of 1970. 663 were built.

This page lists all films, TV series, and video games that feature the Ilyushin Il-12.