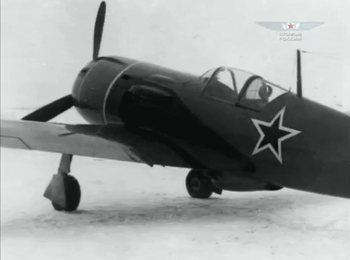 The Lavochkin La-9 (NATO reporting name Fritz) was a Soviet fighter aircraft produced shortly after World War II. It was a piston engined aircraft produced at the start of the jet age. La-9 represents further development of the Lavochkin La-126 prototype. The first prototype, designated La-130 was finished in 1946. Similarity to the famous Lavochkin La-7 was only superficial – the new fighter had all-metal construction and a laminar flow wing. Weight savings due to elimination of wood from the airframe allowed for greatly improved fuel capacity and four-cannon armament. Mock combat demonstrated that La-130 was evenly matched with La-7 but was inferior to Yakovlev Yak-3 in both horizontal and vertical planes. The new fighter, officially designated La-9, entered production in August 1946. A total of 1,559 aircraft were built by the end of production in 1948.

This page lists all films that feature the Lavochkin La-9.