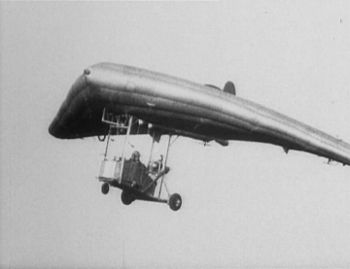 In 1957, Britain's M. L. Aviation Co. showed off the first model of a new inflatable-wing, two-passenger aircraft which may be the sky-auto of the future. Named the "Flying Mattress," the new plane featured a 40-ft. span delta wing, made of light fabric and easily inflated by compressed air machines or by a regular tire pump. When deflated, the wing was small enough to fit in a car's trunk compartment. Inflated, the wing sits on posts above a 10-ft. wooden fuselage, was held in place by struts. A pusher-propeller, powered by a 65-h.p. engine, gaves the plane a top speed of 45 m.p.h. The 550-lb. Flying Mattress was easy to fly. With no wind, it required only a 100-yd. landing strip; in strong winds, it landed almost vertically. Flight-tested by the Ministry of Supply, the Flying Mattress was slated for army use as a courier and reconnaissance plane and as an aerial sports car for civilians use. In 1960, military trials using these aircraft were undertaken at Middle Wallop. Inadequate take-off performance and a lack of agility rendered them unsuitable for service use.

This page lists all films that feature a variation of the ML Aviation Inflatable Wingcraft.