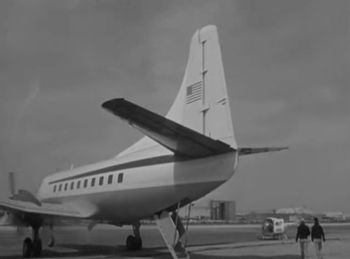 Martin 2-0-2 seen in The Manchurian Candidate.

The Martin 2-0-2 was an american twin-engined piston fixed-wing airliner. It was designed and built in 1947 but a fatal crash in August 1948 revealed a serious structural problem in the wings thus stopping its sales. Even a major redesign of the wing coudn't match the delays in production and the lack of cabin pressurization. Most of the order were cancelled and so only 47 aircraft were built.

This page lists all films that feature a variation of the Martin 2-0-2.