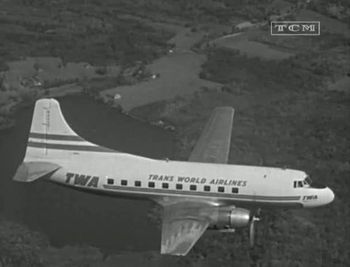 Martin 4-0-4 seen in These Wilder Years.

The Martin 4-0-4 is an American pressurized passenger airliner built by the Glenn L. Martin Company. As well as airline use initially in the United States, it was used by the United States Coast Guard and United States Navy as the RM-1G (later as the VC-3A). When production of the earlier Martin 2-0-2 was stopped due to problems with wing structural failure the company decided to re-wing an improved version (which had already flown as the Martin 3-0-3). The new aircraft was the Martin 4-0-4, it had structural changes to the wings, pressurization and lengthened slightly to take 40 passengers. It had quite fair success with many US, central and south-american airlines companies.

This page lists all films that feature a variation of the Martin 4-0-4.