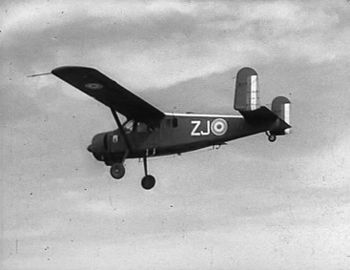 The Max Holste MH.1521 Broussard is a 1950s French six-seat utility monoplane designed by Max Holste to meet a French Army requirement for a lightweight liaison and observation aircraft. It is a braced high-wing monoplane with twin vertical tail surfaces. It has a fixed tailwheel landing gear and is powered by a nose-mounted Pratt & Whitney R-985 radial piston engine. The prototype Broussard first flew on 17 November 1952 and was followed by the first civil and military production aircraft in June 1954, and 363 were built between 1954 and 1959. Its similarity to the de Havilland Canada DHC-2 Beaver in looks, capability and performance lead it to be nicknamed "the French Beaver".

This page lists all films that feature the Max Holste MH.1521 Broussard.