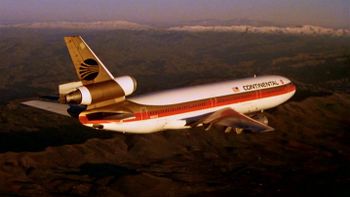 The McDonnell Douglas DC-10 is a three-engined, widebody airliner which consists of two engines on underwing pylons and one at the base of the vertical stabiliser. Designed for medium-long range operations, it was used by many airlines around the world and is still in operation, primarily as a cargo aircraft. The type was also adapted as an aerial refuelling tanker for the U.S Air Force, designated KC-10 Extender. It was later developed into the Category:McDonnell Douglas MD-11.