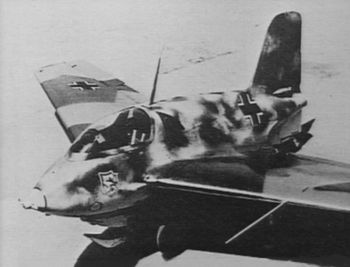 Messerschmitt Me 163 seen in The Story of Aviation.

The german Messerschmitt Me 163 is the only rocket powered aircraft to see operational use. Despite its speed exceeding 1 000 kph (then -in 1944- a world record) and two 30 mm cannon and a stupendous rate of climb for its time, its range of only 40 km and its excessive speed compare to the bomber waves makes it ineffective. Once its rocket was out of hypergolic propellants, it became a glider with nice handling but then its low speed made him an easy prey for allied fighter escort.

This page lists all films that feature a variation of the Messerschmitt Me 163.

Pages in category "Messerschmitt Me 163"