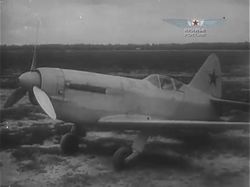 Mikoyan-Gurevich I-250 seen in Wings of Russia.

The I-250 was a Soviet fighter built in a very limied number. Early in 1944, State Defense Comity asked the four main manufacturers to design a jet fighter. As no such engine was available in USSR, MIG ingineers chose to use a Klimov VK-107R liquid-cooled V12 engine of 1650 hp linked to a motorjet. At take-off and during cruise, only the piston engine was working, the air reaction compressor jet working dry. Once the 7 injectors ignited, the maximum speed reach 825 km/h at 7 000 m (thanks to the extra 1350 hp motorjet's thrust at such altitude). After a first flight on 3 March 1945, a serie of 12 aircraft known as MiG 13 was built and pressed into service with the Baltic Fleet but quickly decommisioned (in 1948) due to technological progress and success of real jets like the MiG 9 (1946) and MiG 15 (1948).

Such concept was the basis of the Sukhoi Su-5 (one prototype) and Caproni Campini Ca.183bis (paper aircraft) when the USA added a real turbojet to a piston engine on the Ryan FR Fireball (71 airframes) and the three prototypes of the Curtiss XF15C.

This page lists all films that feature the Mikoyan-Gurevich I-250 / MiG 13.

Pages in category "Mikoyan-Gurevich I-250"