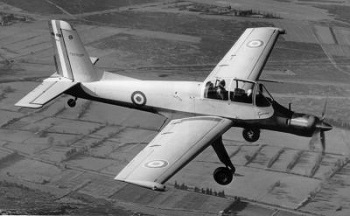 The Morane-Saulnier MS.1500 Epervier was a two seat French low wing, fixed landing gear aircraft intended for ground attack and reconnaissance tasks then used and tested for COIN action during the Algerian uprising. After a first flight on the 12 May 1958, and despite good fly testing, it was not ordered (instead, French Air Force pressed into service 135 North American T-28D). Its flying life neverless was intensive, serving for numerous tests until 1975 for the CEV (Centre d'Essais en Vol / French Air Force Air Test Center), flying with no less ten different engines, lots of propellers. For example, it was one of the flying testbed for the Astazou turboprop intended for the Pucara. Eventually, the last exemple was given to the Le Bourget (Paris) Air Museum ; it was burnt in 1990 in a fierce accidental fire.

Only two prototypes of the Morane-Saulnier MS.1500 were built, the second one flying only six times.

This page lists all films that feature a variation of the Morane-Saulnier MS.1500 Epervier.