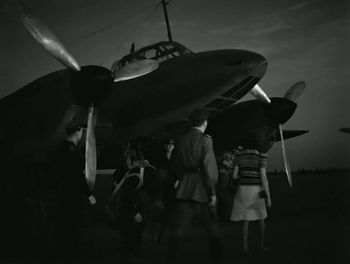 The Petlyakov Pe-2 was a Soviet dive bomber aircraft used during World War II. It was regarded as one of the best ground attack aircraft of the World War 2 and it was extremely successful in the roles of reconnaissance, heavy fighter and night fighter (this two last variant were named Pe-3, about 300 of them being built). The various variants were in service from 1941 to 1954 mainly in the Soviet Air Force but too after the war with the Warsaw Pact Air Forces and People's Republic of China. Finland used seven of them before 1945 after reconditioning downed aircrafts.

This page lists all films that feature a variation of the Petlyakov Pe-2.