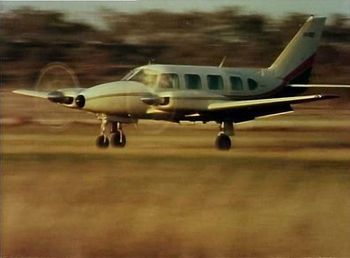 The Piper PA-31 was a series of six to eight seater, cabin class, twin engined aircraft manufactured by Piper between 1967 and 1984. The PA-31 was built in two different lengths the standard model being named the Navajo and the extended length model being named the Chieftain. The Navajo and Chieftain were (and indeed remain) a popular choice with 3,942 being manufactured during its lifespan. The PA-31 was also license built by numerous other companies such as Embraer using kits made by Piper.

This page lists all films that feature a variation of the Piper PA-31.

The following 46 pages are in this category, out of 46 total.