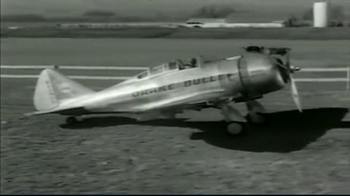 The Seversky P-35 was a fighter aircraft built in the late 1930s. It was the first single-seat fighter in U.S. Army Air Corps to feature all-metal construction, retractable landing gear and an enclosed cockpit. Bought by the Sweden for its air force (Flygvapnet), it was named there J-9 and used until 1952. Some civil airframes were sold under the AP-7 or SEV-2 mark. 196 Seversky P-35 of all variants have been built.

This page lists all films that feature a variation of the Seversky P-35.