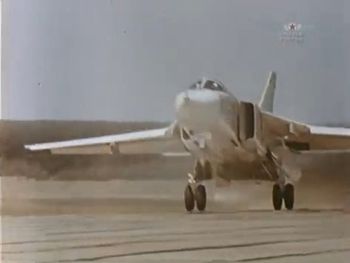 The Sukhoi Su-24 is the result of a long study throughout the sixties. The first prototype named T6-1 have a fixed upper wing with a sweep angle of 40°. It flew for the first time on 2 July 1967. But in 1969, a major redesign included a variable sweep wing which took off in 1970. This twin-engined side-by-side two-seater carried the USSR's first integrated digital navigation/attack system and has become a formidable all-weather attack aircraft. Sukhoi Su-24M is the main variant but there are series dedicated to reconnaissance (MR) or electronic signals intelligence (ELINT)/ECM (MP). Five export customers bought the MK variant (with a downgraded electronic) which keeps the flight refuelling capability of others models using the UPAZ system. In Russia maritime assault is the fact of Naval Aviation crews.

This page lists all films that feature a variation of the Sukhoi Su-24 and its prototypes.