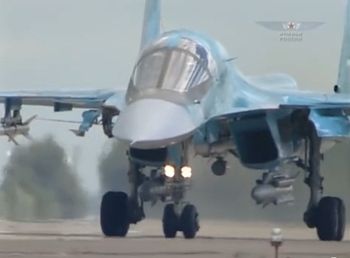 Based on the Sukhoi Su-27 Flanker air superiority fighter, the Su-34 has an armored cockpit for side-by-side seating of its two-man crew. The Su-34 is designed primarily for tactical deployment against ground and naval targets (tactical bombing/attack/interdiction roles, including against small and mobile targets) on solo and group missions in daytime and at night, under favorable and adverse weather conditions and in a hostile environment with counter-fire and electronic Warfare (EW) counter-measures deployed, as well as for aerial reconnaissance. The Su-34 will eventually replace the Su-24 tactical strike fighter and the Tu-22M3 long-distance bomber

This page contains all films, TV series, and video games that feature the Sukhoi Su-34.