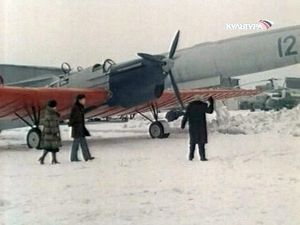 The Tupolev ANT-25 was a Soviet long-range experimental aircraft which was also tried as a bomber. First constructed in 1933, it was used by the Soviet Union for a number of record-breaking flights. The aircraft was designed by the brigade of the Experimental Aircraft Design Department of TsAGI led by Pavel Sukhoi under the overall supervision of Andrei Tupolev. The first prototype, designated Experimental airplane RD-1, (also designated TsAGI-25, ANT-25), RD standing for Rekord Dalnosty, i.e. "Range Record") made its maiden flight on 22 June 1933, piloted by Mikhail Gromov and used a direct drive M-34 engine. A total of 3 were built.

This page lists all films, TV series, and video games that feature the Tupolev ANT-25.