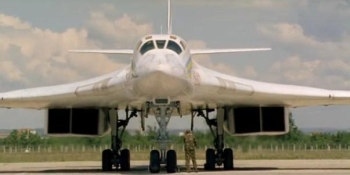 The Tupolev Tu-160 is a supersonic, variable-sweep wing heavy strategic bomber of the beginning of the eighties. The first flight occured on 19 December 1981 but the bomber were pressed into service in 1987. Following the end of the USSR, the fleet was divided between Russian Federation and Ukraine, the last one eventually scrapping or returning the Blackjacks (NATO reporting name of the Tupolev Tu-160) between 1999 and 2001. 16 are now in service after the type was reborn to active service in 2005. While similar in appearance to the American B-1 Lancer, the Tu-160 is larger and faster. They could be easily identified as the B-1B Lancer is usually radar-absorbent black, the Tu-160 is painted with anti-flash white. The other external difference is the lack of moustaches (fins) on the Tupolev Tu-160.

Only 36 Tupolev Tu-160 airframes were built.

This page lists all films that feature a variation of the Tupolev Tu-160.