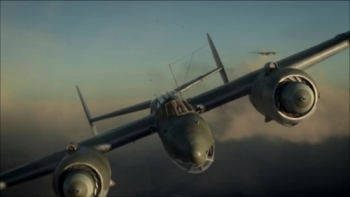 The Tupolev Tu-2 was a soviet high speed bomber with a large internal bomb load. A first batch of 80 airframes was produced then put into frontline service but proved insufficiencies. The AM-37 engine was abandoned to concentrate efforts on the AM-38F (already used on the Ilyushin Il-2 Sturmovik) then on the Shvetsov ASh-82. This needed a new design which eventually gave the Tupolev Tu-2S. This variant was on frontline units at the end of 1944 and was one of the two standart medium bomber at the end of the World War 2 (alongside the Petlyakov Pe-2. The Tu-2 remained in service in the USSR until 1950, some of them being provided to nearly all the Warsaw Pact air forces and the Chinese People's Liberation Army Air Force.

This page lists all films that feature a variation of the Tupolev Tu-2.